After three years and $7,000 spent, founders of a nearly completed community garden in Douglass Park say their idealistic vision may simply dry up.

In March 2010, a team of University of Illinois business and engineering students won $10,000 from accounting firm Ernst & Young to build a community garden in northeast Champaign. The CU-Garden would serve both nearby residents and students from the neighboring Booker T. Washington STEM Academy.

But the founders say the Champaign Park District has been failing to provide promised water. Park district officials responded that it was not their responsibility to do so.

Founders Steve Heiss, a senior in accounting, and Erin Harper, a senior in natural resources and environmental science, say there was an “implicit understanding” that the park district would provide water. Otherwise, they would have built the garden somewhere else or redistributed their grant money to include water-capturing devices.

“Why would you put a garden where you don’t have access to water?” Heiss said. “That would have been a pretty big turnoff for the location.”

When the team first started working on the project in November 2009, they considered several locations with water sources nearby for the garden, Harper said. The park district offered a patch of land in Douglass Park where a community garden had been located in prior years, said Joe DeLuce, the park district’s director of recreation.

But soon after the partnership began, the park district realized the waterline to the garden was not functioning, he said. The district removed it and did not have the funds to replace it.

“If we had water there, they had a right to use it, but we weren’t going to bring water in [for them],” he said.

Several park district officials were unable to provide an estimate of how much that would cost. Since CU-Citizen Access’s initial interviews, the district expressed interest in replacing the water line, Heiss said.

The case of the missing water pipe

Douglass Park borders Booker T. Washington STEM Academy, a magnet grade school. About 630 square feet of garden space have been designated to teach students about gardening and the value of fresh food, using a curriculum that she helped the Champaign School District write, Harper said. 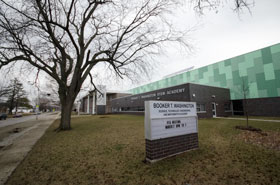 The location, which is in a low-income neighborhood in Champaign, also lets community members rent plots of garden space to grow their own produce. The park district supported the project, though it warned the students about the previous garden, which had issues with people taking its vegetables without permission, DeLuce said.

In early spring 2010, Harper and DeLuce toured the location together, she said. DeLuce pointed out a nearby water spigot and told her he would give the team a key to use it if they won the competition.

After receiving the $10,000 check in April 2010, Harper said, DeLuce told her the water would be turned off starting that summer for the construction of the new Washington school building.

In a recent interview, DeLuce said that he probably assumed at the time that the waterline to the garden was functioning. But the park district’s operations unit later inspected it and saw it wasn’t, he said.

Then, during construction, the school accidentally removed the park’s water system that had been connected to the garden, said Laura Auteberry, the park district’s marketing director. The water system was eventually replaced, but on the opposite side of Douglass Park. The garden spigot was removed.

Harper emailed DeLuce in August 2011, shortly before the school re-opened, to ask about water access. DeLuce responded that the waterline to the garden had been removed.

“They are going to see what they can come up with,” he wrote, referring to the operations unit, “but we cannot say when and how soon that will happen.”

A garden for social change

The Champaign Park District allotted $130,000 to water utilities in its $11.3 million budget this year. The district, which primarily serves the 81,000 residents of Champaign, rents out plots for $30 to $40 in its own community garden in Dodds Park, three miles from Douglass. Water access is included.

This is especially important in the neighborhood around Douglass Park, where 30 percent of families are living in poverty, according to the 2011 American Community Survey. There’s a County Market less than a mile away across University Avenue, but Meline guessed that residents are more likely to choose fast food for their meals because it’s cheaper and closer.

Meline commended CU-Garden for partnering with Booker T. Washington School. The garden could not only teach students about the value of growing their own food, he said, but also subsidize costs for vegetables in school lunches. 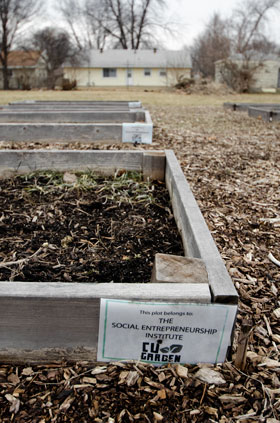 Heiss said the idea of using water from the neighbors would not work. He said the garden’s neighbors couldn’t front the cost of that much water, even if they were reimbursed. Washington grade school was also unable to provide water, Harper said. Representatives from both the school and school district declined to comment.

Douglass Community Center was an option until the spigots connected to the center were vandalized and removed last summer, Harper said. She received word that the park district could not afford to replace them right away.

Harper then bought a 55-gallon water barrel with garden funds and attempted to grow vegetables for the school plots. She filled it up several times a day at her grandparents’ house and drove it over, she said, but she could not keep up with the drought conditions. Last fall, the garden was covered in weeds and unruly vegetables.

Harper has not heard yet whether the community center’s spigots are functioning again, she said. She said she has been frustrated by the park district’s lack of communication throughout the process.

Emails provided by Heiss and Harper showed gaps in communication on both ends, often spanning several months. Communication seemed to stop completely during the school construction.

Heiss acknowledged he hasn’t been communicating as often as he’d like.

“I’m a full-time student first,” he said. “The park district officials are getting paid to do their job. I’m not.”

“We explained to them that they must do the work and maintain the garden as we did and do not have staff to assist,” he said. “As they found out, it was harder to make happen then they realized, and we had gone several months where we did not hear from them.”

The waterline to the garden may be reconnected some day, Auteberry said, but it’s not a top priority for the park district. 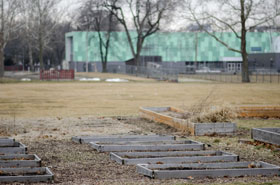 From the park district’s perspective, the garden’s lack of progress isn’t because of water problems but because “the garden overall hasn’t been that successful,” she said.

It will take more effort from permanent members of the community to move the garden forward, DeLuce said.

But to the garden team, all the pieces for success are in place. C-U Fit Families, which promotes healthy eating, and the health district’s We Choose Health initiative have both expressed support for the project, said Heiss.

The team also garnered support from several government officials, including Illinois Governor Pat Quinn, who sent a personal letter of approval, and Champaign mayor Don Gerard, said Heiss. And the school district has a curriculum ready once the garden is ready for students to use, Harper said.

With the help of dozens of community members, the CU-Garden team has built a flowerbed, seven plots for the school and 16 community plots. It rented out all 16 for this summer, although most of renters do not live in the surrounding community.

Heiss said they plan to meet with the park district this spring and hope to see children using the garden and more community involvement before he graduates in May.

“I always joke that the easiest part of this project was winning the money. I didn’t realize what I was getting myself into,” Heiss said. “At the end of the day, it’s not just some student project — it’s something that’s going to become the fabric of the community.”