My dad’s story is eerily similar to so many others who’ve battled the disease. In July of 2008, he complained of a minor pain in his stomach.  When a double-hernia surgery didn’t resolve the issue, his doctor recommended a CT scan.

On September 8, 2008, that scan revealed a 3-centimeter mass on the head of my dad’s pancreas.

Two lesions on his liver meant the cancer had already spread; he was not a candidate for the Whipple, the one terribly difficult and invasive surgery that could have saved his life. For the 15 percent of patients that are able to have the surgery, the rate of recurrence is extremely high.

I shared news of the diagnosis with a good friend of mine, a physician, in early September.  “Celebrate Thanksgiving in October,” she said. “Don’t wait for November.”

Pancreatic cancer is a brutal disease with horrifying survival statistics. According to the Pancreatic Cancer Action Network, 73 percent of patients die within a year of diagnosis, with the average survival ranging from three to six months. The five-year survival rate is a mere 6 percent, the only one of the top-five cancer killers still in the single digits.

My dad did make it to Thanksgiving that year, though we spent much of the holiday in the hospital attempting to bring down a fever brought on by chemotherapy. 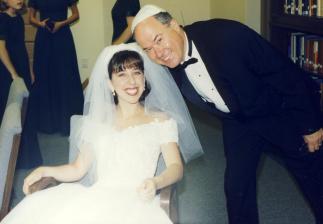 While mammograms detect breast cancer and colonoscopies find colon cancer, there are no early detection tests for pancreatic cancer. And there are no effective treatments for the disease.  Chemo can buy time and ease symptoms, but chemo can’t cure the disease.

My dad proudly took part in two clinical trials – he wanted to do his part to contribute to science – but was forced to drop out of the first one after going into anaphylactic shock from the trial drug.

He died at the age of 69, just a few short weeks after finishing the second clinical trial.

Doctors couldn’t tell us what caused the horrible disease that took my dad from diagnosis to death in a short, terribly difficult 14 months. Like so many pancreatic cancer patients, my dad had few, if any, risk factors. He watched his diet, exercised regularly, didn’t smoke and took care of himself.

National Cancer Institute statistics show that between 2006 and 2010, approximately 1700 people in Illinois were diagnosed with pancreatic cancer each year, with 17 of those cases in Champaign County. This year, more than 45,000 people in the United States will be diagnosed with the disease, and more than 38,000 will die.  And those numbers are on the rise. Pancreatic cancer is expected to move from the fourth-leading cancer killer to the second by 2020.

This disease has very few survivors, too few spokespeople to raise their voices to ask for help. I volunteer with the Pancreatic Cancer Action Network in memory of my dad and with empathy for so many others suffering the effects of this disease. I work to raise awareness about the disease and to raise money for research.

I want doctors to be able to detect the cancer earlier — before it spreads — and increase the chances of survival. I want effective treatments so that those newly diagnosed can ask, “How do I live with this disease,” instead of, “How many weeks until I die?”

I want a cure.