Among the most trending topics on Facebook and Twitter in late June were peaceful protests, a give away of seven $50 gift cards to local restaurants and fireworks concerns all around Champaign-Urbana almost a month before the 4th of July.

Below are the main topics local citizens were concerned about from the 10th of June till the 26th of June. Searching by the hashtags #champaign, #urbana, #champaigncounty, #chambana showed that Twitter users were less active during the last weeks. While Facebook has a group of 40,000 members, Spotted in Chambana, where almost each hour people post their concerns.

In the midst of multiple beautiful photos of cornfields, sky, sunsets, and rainbows; numerous posts of some restaurants’ or personalities’ appreciations; lost/found pets reports; car accidents or car/bicycle thefts; claims on losing power or internet connection at a particular city area; members of the local Facebook group actively discussed other topics. We have chosen the most popular or controversial posts with more than 100 reactions or comments. Some of the topics were also in trending tweets.

The most trending publication in Spotted in Chambana gathered tremendous 2.3K reactions and 2.7K comments. Michael Namoff, calling himself Big Mike, created a give away of seven $50 gift cards to the C-U local restaurants. To participate in this “lottery” people should have commented and liked the post. 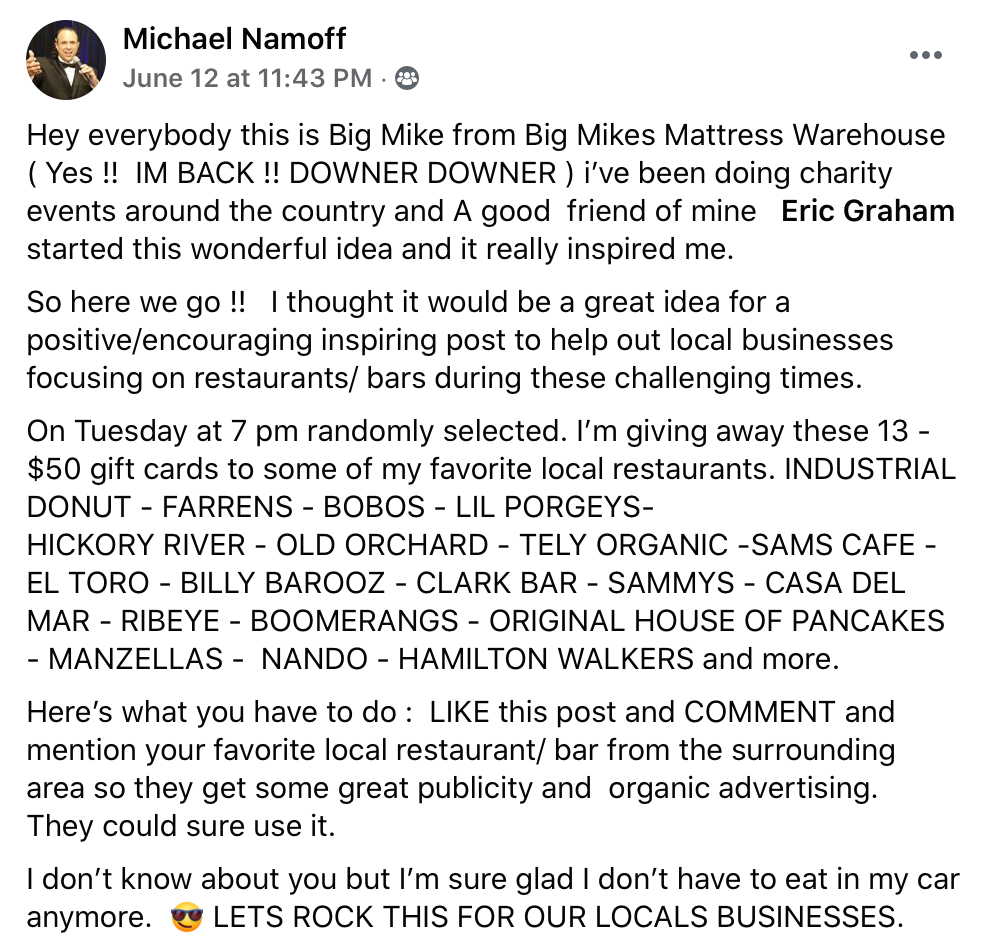 Users both on Facebook and Twitter asked each other a lot of times why they hear fireworks almost every day from the beginning of June. Many people do not understand who sets the fireworks all around Champaign-Urbana since they are illegal in Illinois.

Others complain sarcastically, asking if, “this entire community got together for a town meeting and decide to start a competition on who can set off the loudest fireworks every night before the 4th of July or something.”

Comments below such publications are various. Some agree with the illegal actions and complain that they want to sleep at night. Others state that, “It was Juneteenth thus the reason for fireworks”. Or “You guys do know it’s a pandemic? Can children and their families not have fun? Are the fireworks killing you? Like come on. Y’all complain about ANYTHING.” Twitter users asked shortly, where they can buy the fireworks in Illinois instead of going to Indiana.

The fireworks problem led to a true misunderstanding. People ask whether they have heard gunshots or fireworks in Urbana by Meijer or near Mattis in Champaign, for example. Mostly, they receive answers containing “oh, sure fireworks.” However, comments like that did not work with the situations at the County Fair on June 23rd — a 16-year old boy shot in the knee. Confused users posted images questioning whether they had heard fireworks at the County Fair or not.

Peaceful protests and marches on June 19th (Juneteenth March in Champaign), June 23rd, June 25th, and demonstrations on June 27th and 28th took a significant part at the Twitter and Facebook feeds. 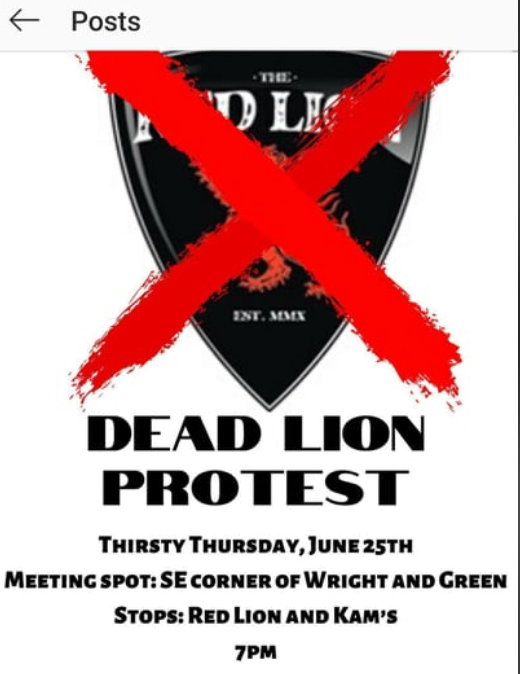 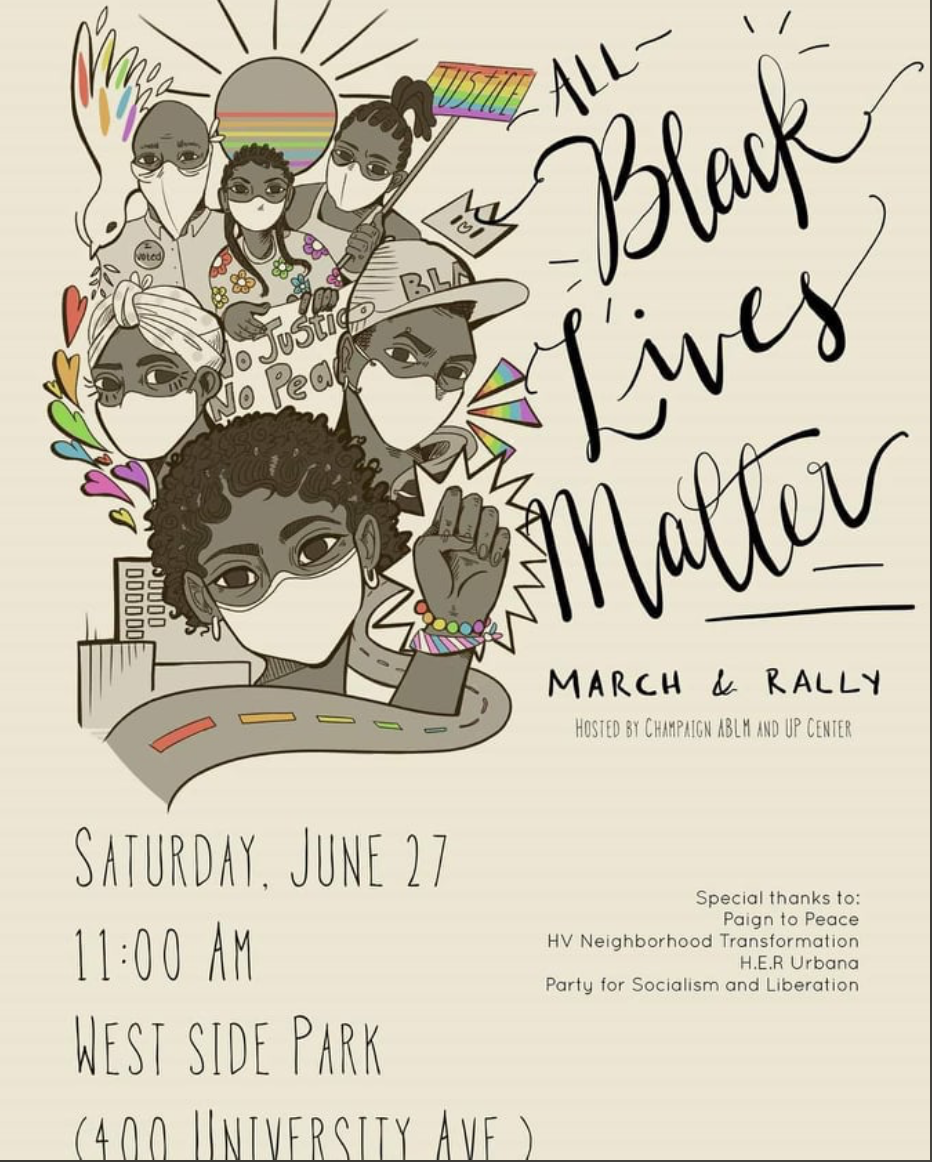 Citizens posted about crimes and accidents based on race. Hundreds of users leave their apologies under such posts. One of them from June 20th had the following text: “someone in a gray SUV or truck rammed my daughter from the back. They were driving at a high rate of speed and never slowed down.”

Commentators shared their stories about inequality a lot: “Not surprised, my daughter was called [the n-word] on the playground. When she reported it to her teacher at Thomas Paine Elementary, she said that’s not her problem and she should have reported it at recess. After that I just see things in black and white”.

One of the news on the Black Lives Matter theme was discussed both on Twitter and Facebook. On June 19th, a local citizen found neo-nazi flyers in his yard. People were told to ignore them and claimed that, “many towns in Illinois have woken up to flyers spouting the n-word and talking about skinheads will protect you and things of the sort. The Danville area had them a week or so ago.”

On Facebook as well as on Reddit, locals are worried about geese problem in Champaign-Urbana. Although, not about dirty sidewalks. A Facebook member left a precaution to the drivers — he sees a lot of geese corpses on the roads.

A member of Spotted in Chambana on the 24th of June reported that he was at the Champaign DMV, and not all the employees of the state facility wear masks. Someone joked that, “They work at the DMV, they’re already dead inside.” Others critiсized the author of the message for unreasonable claims — maybe those workers have medical issues allowing them not to wear masks. The Champaign Secretary of State Facility decided not to comment on the post and said to contact a press secretary in Springfield, where a representative could not yet be reached for comment.

COVID-19 still remains one of the most popular topics on social media based on the number of posts. Last two weeks people have discussed how the Gov. Pritzker handled the disease by posting the news that Illinois has one of the largest case decrease in the USA. Others collected “likes” for tweets about testing at the University of Illinois. 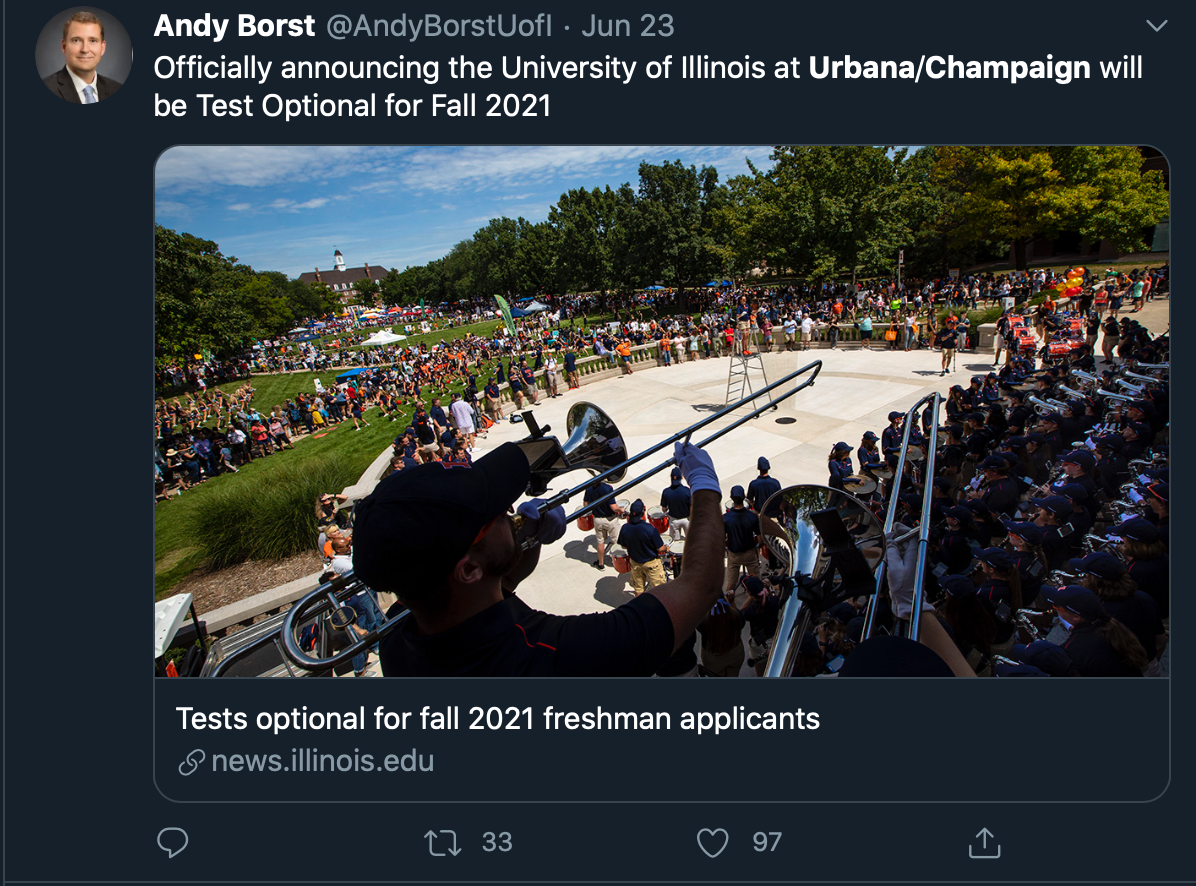 There is a special section called “Positive Posts” at Spotted in Chambana. Citizens thank each other for buying coffee or meal, or just for a simple help and favor. One thank you was for a man who helped in the rain to cross the road a woman with a walker. Enjoy this pleasing text about a dancing girl in the parking lot, too.

Oh, and look at the breathtaking pictures shot during the last week’s storms.