By Emma Weissmann/For CU-CitizenAccess.org — Champaign County residents see the transmission of sexually transmitted infections as among the lowest-priority health concerns in the community.

Yet the county’s rate is higher than the state average. Indeed, the county rate for chlamydia is sixth highest in the state. It is seventh for gonorrhea and 15th for early syphilis, according to 2012 data from the state Department of Public Health. 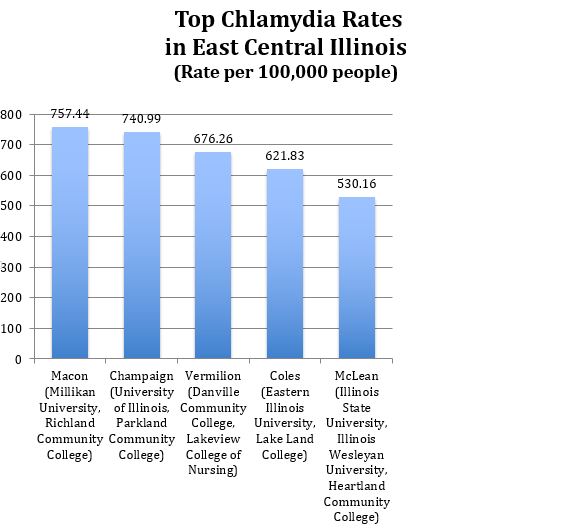 Obesity, heart disease and child abuse are all “high-priority” health concerns in Champaign County, according to the report, whereas infant death and dental problems joined STI transmission as “low-priority,” according to a county survey of approximately 1,000 residents.

The findings from the survey were published in the Champaign-Urbana Public Health District’s 2014-2016 Community Health Improvement Plan.

Despite the county’s higher rates, the community’s level of concern about the issue may not necessarily be a bad thing, said Candi Crause, director of infectious diseases for the district.

“In my mind, (the reason for it) was twofold,” Crause said. “First, there were more pressing issues that are affecting a greater number of our citizens (like obesity and heart disease).  And, we have a lot of services to address STD issues in the community.”

The district’s services for sexually transmitted diseases include a walk-in clinic at its Kenyon Road location, open from Monday to Friday from 8:30 a.m. to 11:30 a.m. and 1:00 p.m. to 4:30 p.m. Residents can be tested for chlamydia, gonorrhea, syphilis, HIV and herpes types 1&2 at this location. There is also a men’s screening clinic and two mobile clinics that provide services to residents in their own neighborhoods.

One reason the county’s rates may be higher, Crause said, is that the county is home to the University of Illinois’ flagship campus. In the case of chlamydia, gonorrhea and syphilis, the Centers for Disease Control and Prevention reports that individuals aged 20 to 24 have the highest transmission rates. And, as Crause pointed out, the members of the University’s 40,000-student population “are also part of our community.”

Although Champaign has the largest university in East Central Illinois and the county leads in the region’s transmission of syphilis, it follows behind Macon County—home to both Millikin University and Richland Community College—in both chlamydia and gonorrhea transmission.

The five highest transmission rates in the region (with the exception of Livingston County in gonorrhea transmission and Shelby county for syphilis) belong to Champaign, Macon, Vermilion, Coles and McLean. All are home to at least one university.

“(If) you do more testing, you’re going to have higher rates,” Crause said. “The services (students) receive around STD and HIV are typically through the University. In other counties that don’t have as many services the rate is (lower), but it doesn’t mean that the disease isn’t there, they’re just not finding it.”

Dr. Robert Palinkas, director of McKinley Health Center, the University’s on-campus health clinic, attributed the results of the Health Plan to “the excellent detection services in our community.” He wrote in an email that he believes the majority of students at the University use “some version of our STD services,” which may also drive up the county’s rate.

“If you look for something really well, you will find more cases,” he said.

Palinkas said that, in addition to STD information on the health center’s website, the center distributes condoms and other related products to students free of charge to students and McKinley’s “Sexual Health Peers” work to educate students on safe sex practices.

Despite all these services, Jessica Johnson, a member of Sexual Health Peers at the University and a first-year graduate student in Social Work, wrote in an email that she doesn’t believe that her peers are fully aware of all the services that are provided.

“There are many students who are unaware about many topics related to sex, including the availability of STD testing and services,” she said. “(The Sexual Health Peers) attempt to broadcast ourselves as much as we can, but it is hard to promote something that some people can be very uncomfortable talking about.”