The chair of the Champaign-Urbana Public Health District Board, Danielle Chynoweth, said that she is concerned that some citizens cannot get tested for COVID-19.

“Frankly, I think the community is well aware that if you are a student or professional on campus, you have first class access to testing through the saliva test. And that is not available to people outside of the community,” Chynoweth recently said.

“I’m concerned they’re not getting tested,” she said about county residents.

Though she has not reported receiving a single complaint about testing accessibility, she says there are multiple reasons why someone may be deterred or unable to get to the free testing site at the Marketplace mall.

Chynoweth said that transportation could be an issue for people who live in poverty: “In terms of transportation, there is a bus that goes there but it is not in a major hub. You have to think of the transportation of going by bus. Taking the bus is exposure.”

There also has been concern nationally about the ability of people of color to get tested, especially because they have been identified as more vulnerable to the virus.

Though the latest data update shows that people who identified as Hispanic accounted for 6% of testing, they have made up 11% of the current number of confirmed cases.

“In the first few months when COVID started we did definitely see a significantly higher number of positive cases in the Latinx community,” said Epidemiologist Awais Vaid of CUPHD.

Vaid said that a probable cause for this disparity could be densely populated working conditions. There was a large outbreak this summer in Rantoul among Latino workers at a meat processing plant, for example.

“We know that more density in an indoor location is a significant factor in increasing the number of cases,” he said, “And I think that’s what we saw a lot initially, and even now when we see those cases, those are the main contributing factors.”

Melaney Arnold, public health information officer at the Illinois Department of Public Health, wrote in an email, “The data show Black and Hispanic populations are disproportionately impacted by COVID-19.”

Though the 2019 census confirms that 14% of Champaign’s population identified as Black, the latest update on IDPH says that group only accounts for about 8% of those tested. In the last week only 1.16% of tests, which is over 4,000, have not included an identification of race.

Vaid says that a probable cause for lower testing rates among the Black and Latinx communities could be the fear of missing work, and therefore losing a source of income.

“The issue with some of the subpopulations in the Hispanic or the African American community is that many of them may not want to be tested because of the fact that if they test positive, they’ll have to be put in isolation,” he said. “That could mean they’re working in jobs which do not provide sick time or time off, and that would mean a loss of income for a lot of these individuals.”

Racial testing data has been removed from the CUPHD website, though it is still being kept track of by the Illinois Department of Public Health.

Vaid said in an email that this information was taken down from the CUPHD website because the downloading of multiple instances and dates became “cumbersome”, as the state database was “unable to handle daily downloads.”

In order to receive testing at Carle Hospital, it must be covered by insurance and be pre-screened by a doctor for reasons such as exposure to the virus or a display of symptoms. A test will either cost $52 or $175, depending which test is taken.

Testing at OSF “may or may not have an out-of-pocket cost, depending on your insurance plan,” according to the website. Out of pocket costs for a COVID-19 test start at $99, while an antibody test starts at $50.

To be tested at Christie clinic, the person must already be a patient, meaning they already have a primary care provider at the clinic. The person must also already be showing symptoms of the virus. The out-of-pocket cost for a nasal swab test is $105.

The state-confirmed COVID-19 testing center is located at the Marketplace Shopping Center in Champaign.

It is free of cost, and a person is able to receive a nostril-swab test regardless of insurance, documented status or criminal record. Testers do not need a doctor’s referral for the test, do not need to be exhibiting symptoms of the virus, and do not need to have been in close contact with an infected person. Testing occurs from 8 a.m. to 4 p.m. each day.

Julie Pryde, the administrator for the county health district, said that there have been problems in the past because of the testing methods.

“One of the biggest barriers early on was the fact that it was a nasopharyngeal swab, which goes very, very deep into the nose,” she said, “It’s uncomfortable and a lot of people don’t want to do that. So, then, they moved to just the nasal swab, which is completely painless and very quick.”

When the mall testing facility opened in May, tests were being conducted by 60 members of the National Guard daily. A change made in July allows for testing now to be administered by an independent contractor. With this change also came options for walk-up testing, Julie Pryde said.

“That was a barrier as well because it looked like a military checkpoint, when you drove up there, and that in itself is going to be a barrier,” Pryde said. “So we pushed really hard to get them to at least not be in those clothes. The state eventually changed that,” said Pryde.

Chynoweth also heard from citizens that people were concerned about having their undocumented status exposed when the site was run by military personnel.

“They were dressed up in military uniform, and that was deterring some individuals,” said Vaid. “Again, there was no need for asking about citizenship or any of that, but it’s just, you know, the fear of that.”

Vaid says the CUPHD is looking to improve Marketplace Mall’s testing facility by adding more drive-thru lanes and working with the state to expedite testing turnaround. Vaid says it currently takes 2-3 days but the CUPHD would like to see turnaround at no more than 24 hours.

“We do know that there are areas of the county which are not accessible,” said Vaid “The Marketplace mall testing site may not be the most accessible for a lot of individuals. People living in the southern part of the county may have difficulties getting here, or people in Rantoul or other small towns as well.”

On getting tested, Chynoweth said: “As somebody who works with the very low income community in Urbana, the primary issues that we’ve seen are having time, transportation, and safety. If you’re in survival mode and you’re trying to meet your basic needs like food and shelter, [COVID testing] is not a high priority.”

A mailout pamphlet was released by the Cunningham Township, where Chynoweth is town supervisor, to all residents of Urbana, which listed COVID-19 testing and resources for the community. It offered aid for issues in the community that have worsened since the pandemic began, including assistance with food stamps, disability and utilities. 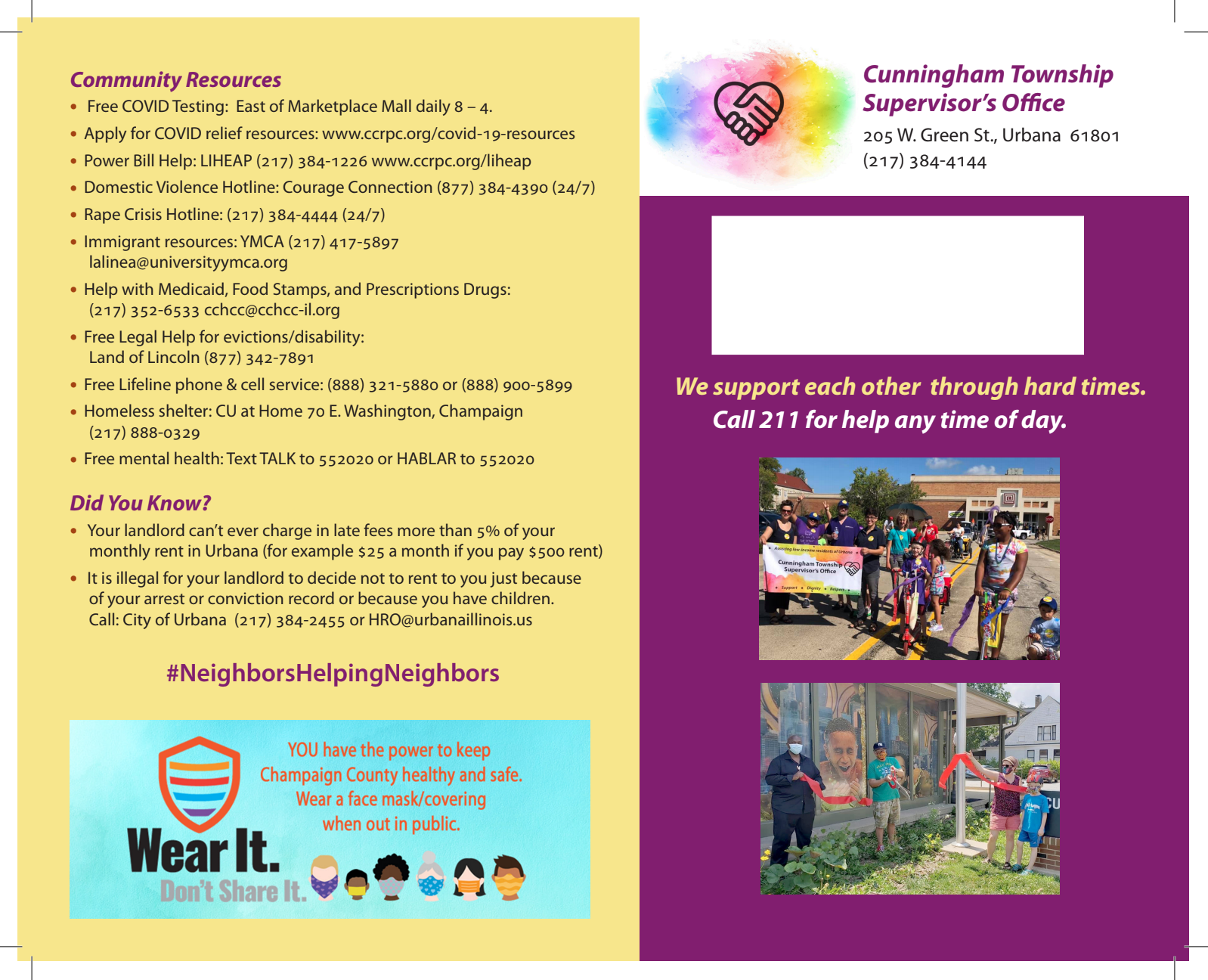 This resource pamphlet was mailed to all residents of Urbana on October 21, 2020.

The pamphlet offered resources for some of these basic needs that Chynoweth says aren’t being met, which further perpetuates gaps and the lack of COVID-19 testing. One of these issues is unemployment, as unemployment remained 6% higher in September than it was in March while people faced eight-hour telephone hold times for the unemployment office and the shutdown of libraries, which meant the loss of computer access for some.

Chynoweth says that the public health department plans to continue a decentralized approach by tending to outbreaks and hurting communities.

“In May, we had an outbreak at Rantoul Foods and we brought tests on site and were really able to work with the Latino community to get folks tested and quarantined, and frankly, we really saved a major disaster,” said Chynoweth.

In terms of expanding testing, Julie Pryde says that the health district is beginning to gain access to a new rapid test from Abbott Labs called BINAX. Pryde says the district is looking for the best places to administer these tests, such as jails and schools.

“I know that we are working with the local community schools and other facilities such as the homeless shelter to provide some rapid testing, which has also come to us from the state. That is in the process right now and will make testing more accessible for the broader community,” Vaid said about this process.

There is work to be done before it can be administered across the county.

“You can’t just do it and say ‘Here’s your result.’ There’s a whole back end involved in every single test,” Pryde said about administering BINAX in schools. The process of implementing BINAX in Champaign-Urbana schools would include recruiting staff. There would also have to be designated space to set up a testing center.

“In terms of collaboration: the hospitals, the university, and public health, and the communities have been collaborating very closely since day one. In my 25 years of living in Urbana, I have never seen such a high level of collaboration,” Chynoweth said.

Early in the pandemic, Pryde said Chancellor Jones reached out to Carle, OSF, and Public Health, and asked how the University of Illinois could help. She says they created ventilators when public health was worried about running out, and supplied hospitals with hand sanitizer. She also said the theatre department in Krannert was making masks and gowns.

“Had they not have done that, we would have never agreed to bring students back,” Pryde said about the SHIELD test.

Robin Kaler, associate chancellor of public affairs at the University of Illinois declined to comment on the University’s latest plans to expand SHIELD testing into the community.